PAC Performance have been established for over 20 years and what was once a small family partnership has now developed into an industry of fast cars, big burnouts and state of the art engineering. The family owned business is at the forefront of the Rotary and Import scene, having produced some of the fastest cars and exciting racers in the world. Their support team consists of a dedicated group of tradesman both on and off the race track. 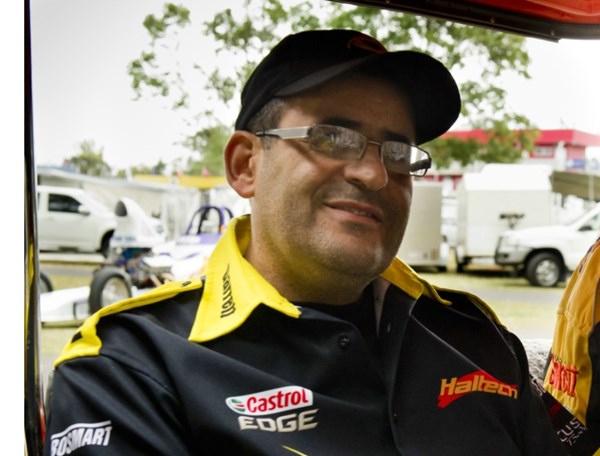 Rocky is responsible for the research and development at Pac Performance. He has over 25 years experience in the field and with his engineering background and extensive knowledge of the rotary engine, he is one of the best qualified rotary engine builders, dyno tuners and EFI Specialists in the world. 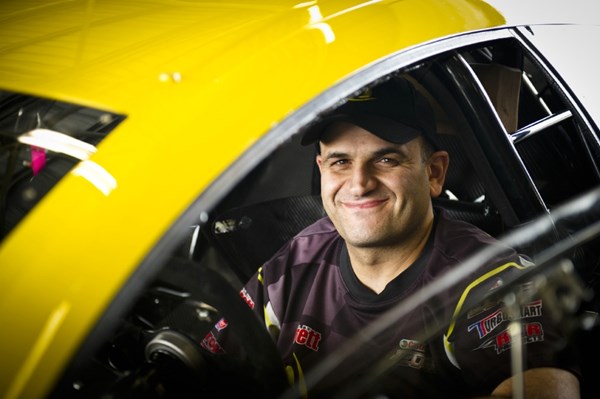 George is the workshop manager/ foreman and driver of our Mazda6 SP. When he is not assisting Rocky with the technical aspects of the business, he is keeping a close eye on sales, customer relations and the general day to day running of our busy workshop. George is also constantly coming up with innovative new ideas to make our fleet of customer cars even better. 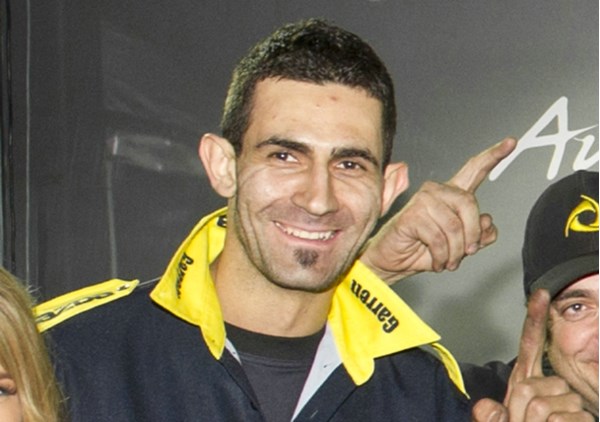 Rodney is the youngest of the three brothers and looks after purchasing turbo sales and customer relations. He is also part of our R & D team working closely with Rocky, George and Chris in developing our #BilletbyPac products. 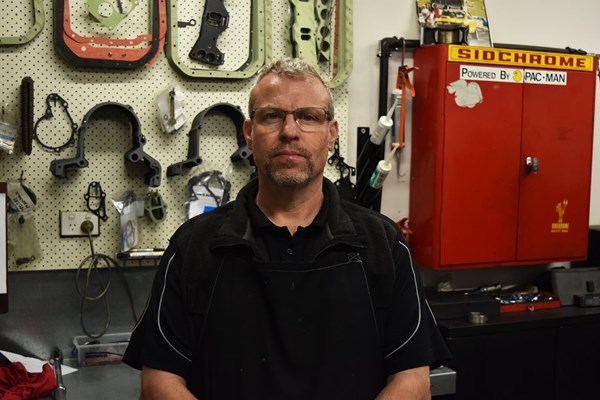 Joining the Pac team three years ago now, Alec brings with him a lifetime of knowledge and experience in building rotary engines. Since joining our team Alec has taken over the engine building duties from Rocky allowing Rocky to focus on tuning, R & D and special projects. 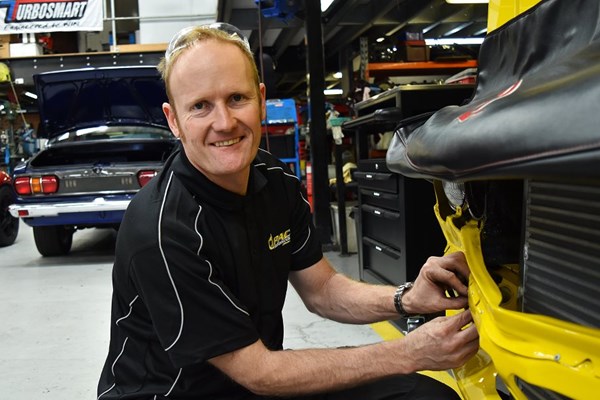 Rob recently joined our team as a full time fabricator and has jumped in head first showing his knowledge from his time as a fabricator in the Navy. 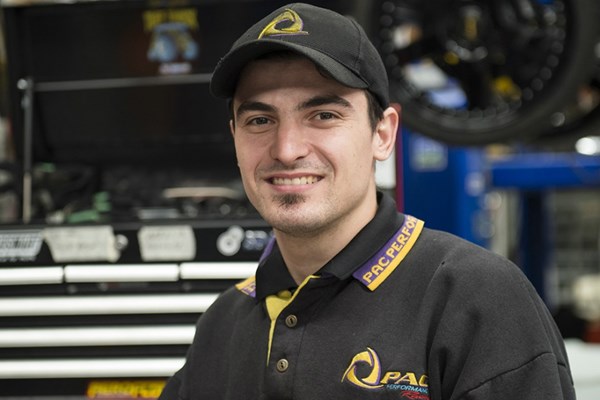 A fully qualified mechanic, Jason has been part of the team for six years now after working through his apprenticeship at another privately owner workshop. When he's not turning tools on the various day-to-day jobs, Jason also looks after engine porting duties as well as some smaller general fabrication jobs. 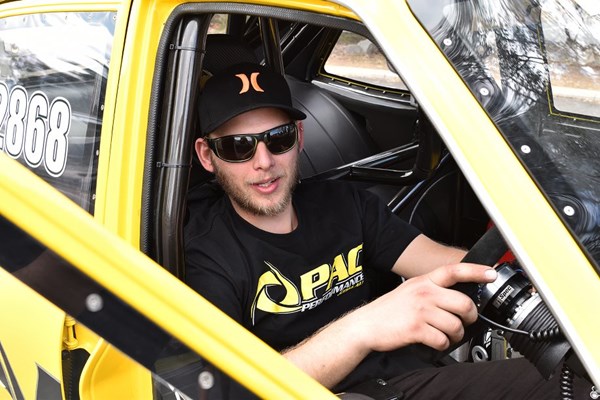 Zach, another fully qualified mechanic joined the team just over two years ago now and with his previous experience is more than capable of doing any job that is put in front of him. When he's not working on tough rotors in the workshop, Zach can be found at the race track as part of the crew looking after our Mazda 6 SP and Rodney's RX3. 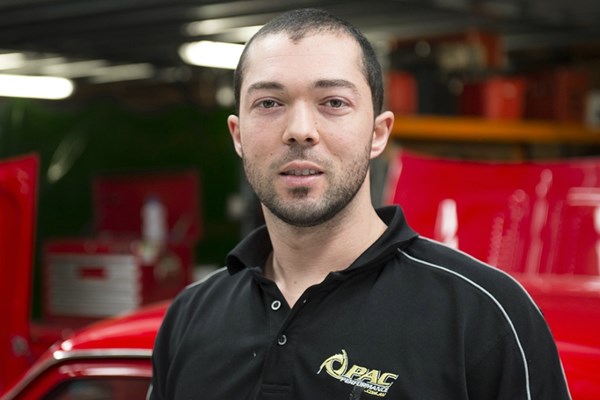 Scibbo is our in-house electrician, looking after all things electrical including wiring jobs, diagnostics and repairs. When he doesn't have a multi meter or soldering iron in his hands Scibbo also helps out Jason and Zach with general workshop mechanical duties 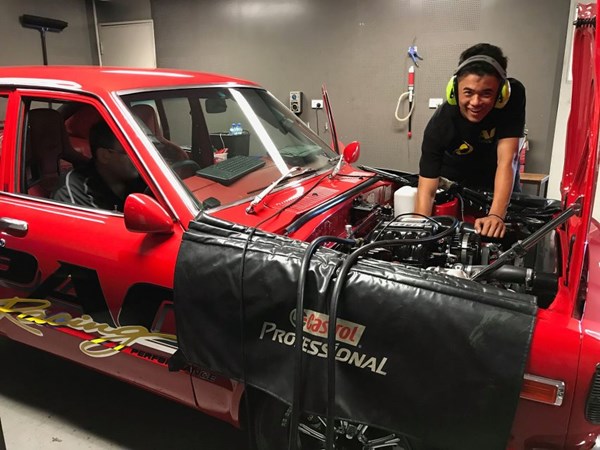 A fully qualified mechanic, Jordan has been with the team throughout his apprenticeship looking after Engine disassembly and preparation, powder coating as well as dyno setup and prep. 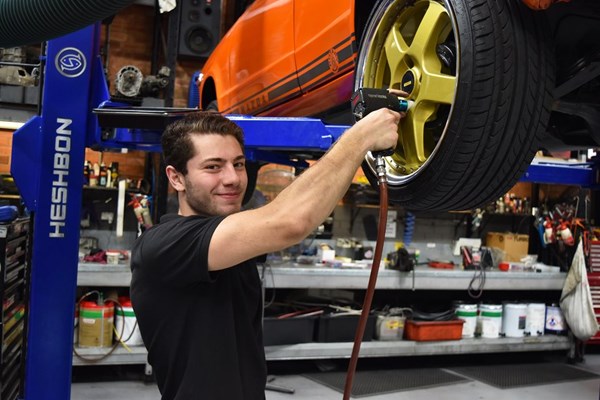 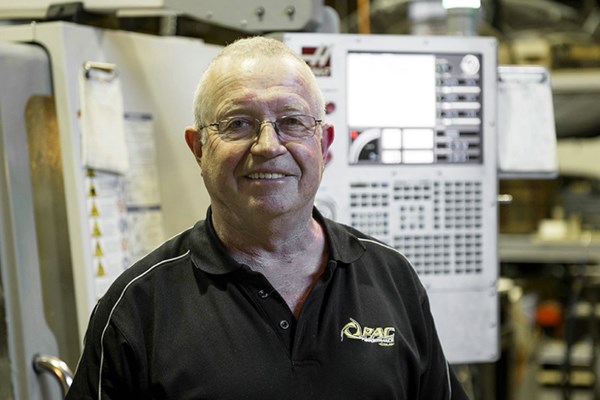 With over 40 years experience as a toolmaker, Chris is our Head Machinist taking care of the larger machining jobs and CNC work. Chris also looks after the design and manufacture of our #BilletbyPac engine and driveline components. 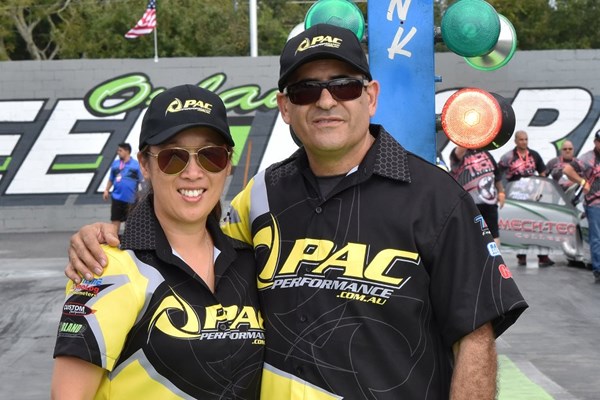 Karen the Pac Mumma manages the day to day running of the business including book keeping, logistics and marketing concepts. Basically she keeps all of us boys in line. 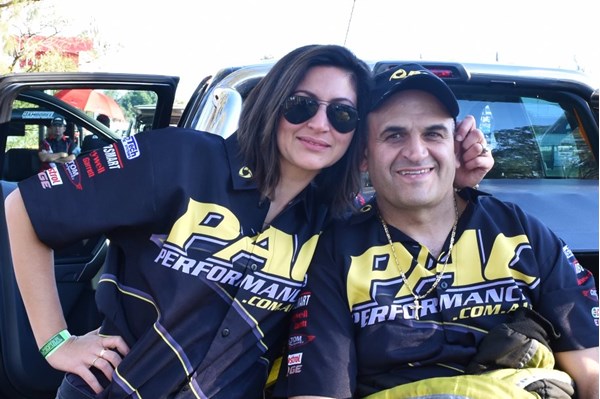 Billie looks after all of our eBay and online sales orders arranging shipments and reconciling payments. 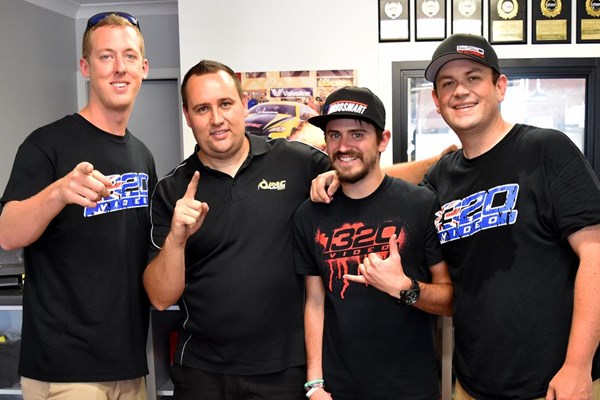 James is our in-house media/marketing manager looking after our website and social media content, making sure its all kept up to date while increasing our online presence. 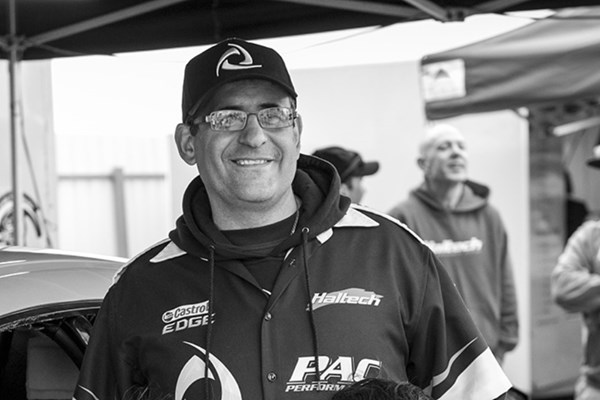 When he's not telling George to calm down with the big burnouts, Rocky looks after the tune for the Mazda 6 SP and also overseas data acquisition and race strategy for our fleet of customer cars on race day. 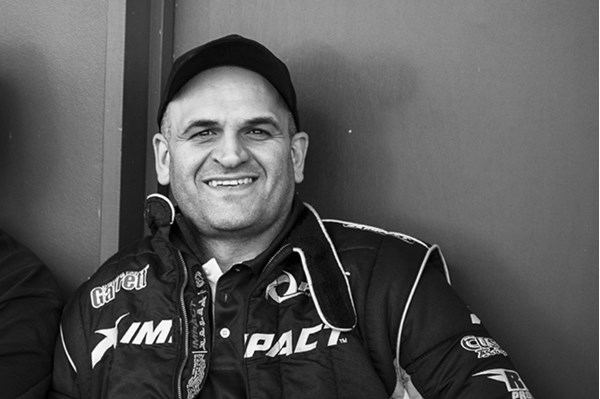 George is the man behind the wheel of the Mazda 6 SP, when he is not doing 3/4 track burnouts and reversing at 200mph he is there at the start line with everyone of our customers offering support. 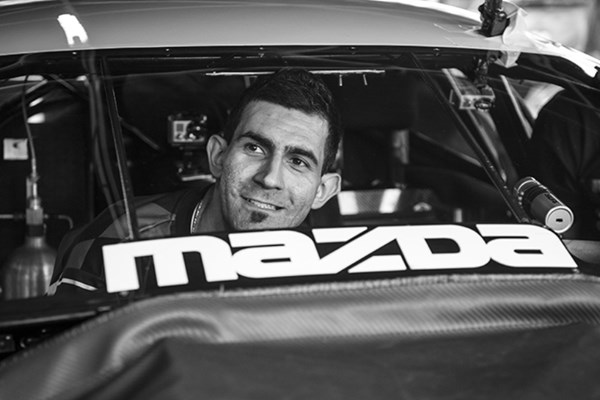 Rodney is the clutch man, sorting out and setting up the clutch system on race day whilst also helping Rocky out with the data side of things.

Rob is an integral part of the team looking after general maintenance duties on the day including changing spark plugs, oil and fluids. Rob also crew chiefs on Rodney's RX3 Sedan. 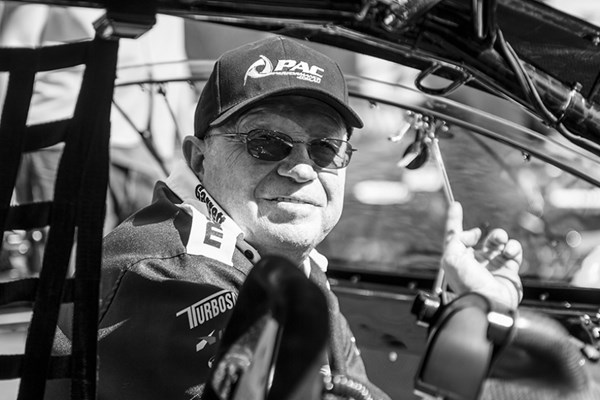 Chris takes care of driver preparation, getting George ready for each run as well as being Rodney's assistant for the clutch. 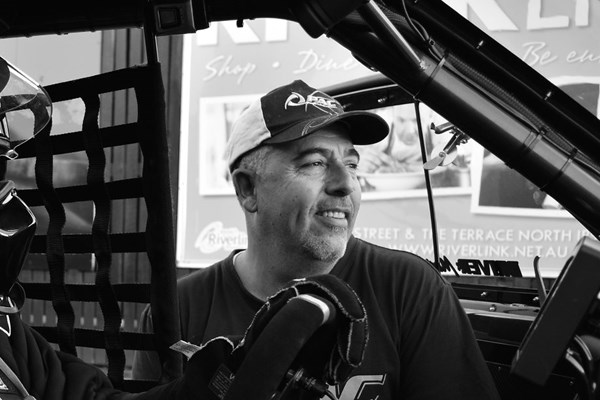 Kevin is our team comedian when he isn't packing the parachutes and doing other general car maintenance. 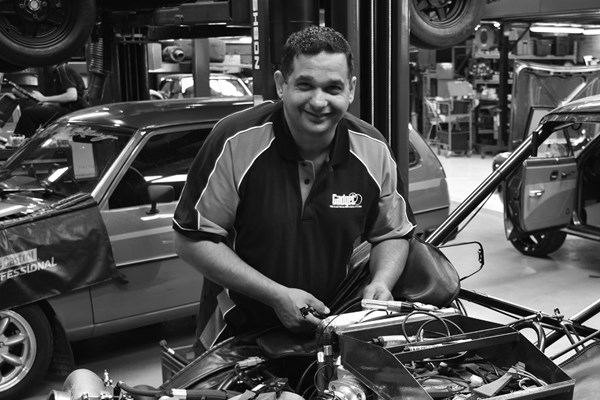 Emmanuel aka GADGET is the team auto electrician looking after all wiring of our race car and assists with any wiring issues at the track. 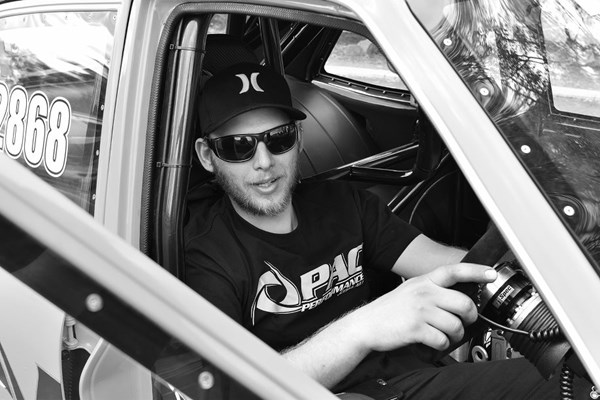 Zach is our on track mechanic helping out where needed to make sure the car is running as it should. 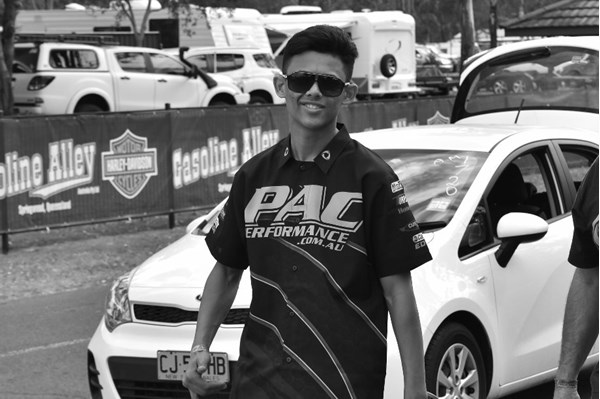 Peter crews on the ROODGY'S BACK RX3 and stays close to his dad, Rocky's side helping out where needed and learning all he can about the fine art of tuning. 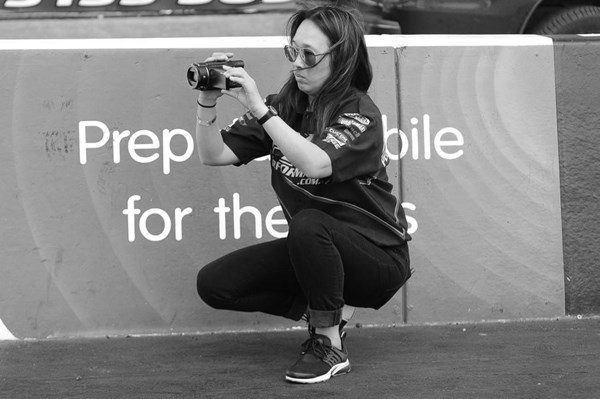 Karen is our live stream Queen keeping our fans updated on facebook when she isn't busy managing our merchandise trailer.

James is our team media manager and looks after the photography and videography at the race track as well as making sure all of our PACsters are kept informed with how we are doing on our Facebook, Instagram & twitter pages. 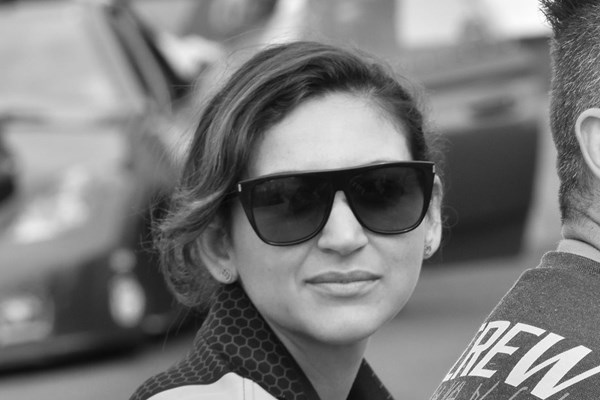 Billie helps manage the merchandise trailer and prepares food & beverages for the whole team at the race track during events while also supporting her husband and Mazda 6 SP driver, George.

Quarter mile drag racing is the very soul of PAC Performance. They eat drink, breathe racing and rotaries. Their initial team consisted of the PACMAN RX3 and EZY08S RX2; two hero cars that worked as R&D subjects, allowing the team to progress to where they are today. Their passion is reflected in the results they have produced with their own cars.

Today Pac Performance is at the forefront of rotary performance, campaigning one of the worlds quickest and fastest rotary powered vehicles with their current lead car, a tube chassis Mazda6 SP that has run a personal best quarter mile ET of 6.26 seconds and top speed of 224mph. 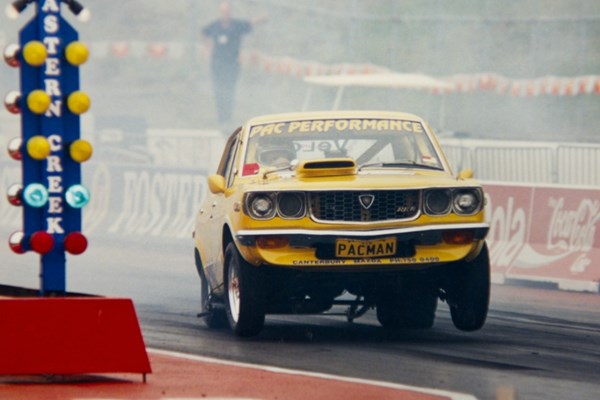 About: The PACMAN RX3 sedan was the original Pac Performance hero car; it’s where it all began. Starting off as a Webber-fed, NA 13B back in 1990 it transformed over the next 13 years into one of the most well-known RX3s in the country and still is to this day.

At one stage the PACMAN RX3 was labelled as the fastest RX3 in the world, an accomplishment that they were very proud of, considering that it was only a 3/4 chassis car. In 2003 The RX3 was sold to an existing customer to help fund a new race car venture, the Pac Performance Mazda MX6. 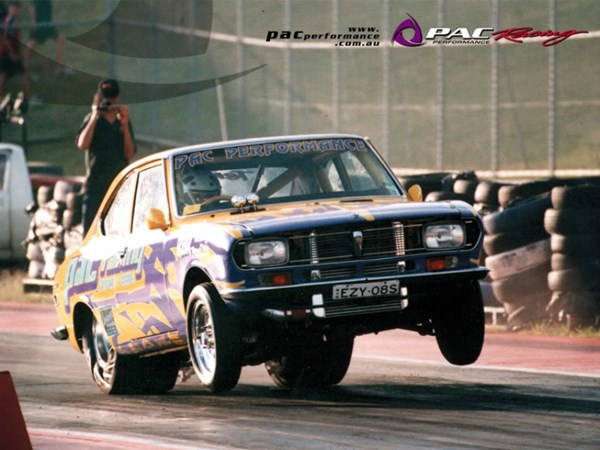 About: A part of the family since 1989, the RX2 coupe later known as EZY08S and PAC272 was Rocky’s baby, easily identified with its striking purple and yellow graphics. Progressing over the years from an aspirated street car to a tubbed and turbo’d dedicated racer it is to this day, one of Pac Performance’s most iconic cars.
Retired from service in 2003 the RX2 was placed under covers and safely tucked away in a corner where it waits patiently for the day it will make its return to the track... 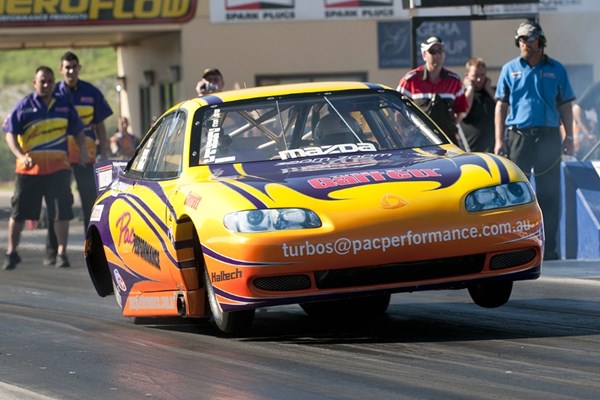 About: The Mazda MX6 was our first foray into a pro chassis with the intension of chasing the world record. Debuted Sept 2003 at the Queensland Jamboree we had instant success with the new chassis; re-setting the National PRO RWD ET and MPH record multiple times and winning three back-to-back national records for PRO RWD in Sport Compact for ANDRA.

The MX6 was retired from service in 2009 having run a best of 6.84@204mph, making way for the new Mazda6 however; the car made a brief but successful come-back in 2011 after Rocky’s accident in the Mazda6. The car then bettered its previous PB with a 6.62@210mph before once again retiring to make way for the current race car, the Mazda6 SP.

About: Younger brother Rodney’s first serious race car, the RX3 sedan was Pac Performance’s 13B R&D vehicle. The Stock chassis sedan had quite a following thanks to its old-school look, slammed stance and performance on the track.

Unfortunately in December 2010 the car was involved in an accident at Sydney Dragway and required substantial repairs however; the car was repaired, albeit with a new owner/driver.

After 6 years away from racing Rodney purchased back his old car and has since pushed the car into the 6's.

About: After coming to a point with the MX6 that the team saw as the limit of the chassis the choice was made to step up into something newer. This saw the introduction of the original Pac Performance Mazda6 in early 2009. The new chassis almost instantly shot Pac Performance into world-wide fame, running a world record quarter mile time for a rotary-powered vehicle of 6.75@209mph, steered by Rocky at the 2009 Fuchs Nationals.

The car then proceeded to better that ET with a string of new world records until an unfortunate accident in 2011 saw the car retired from service indefinitely. 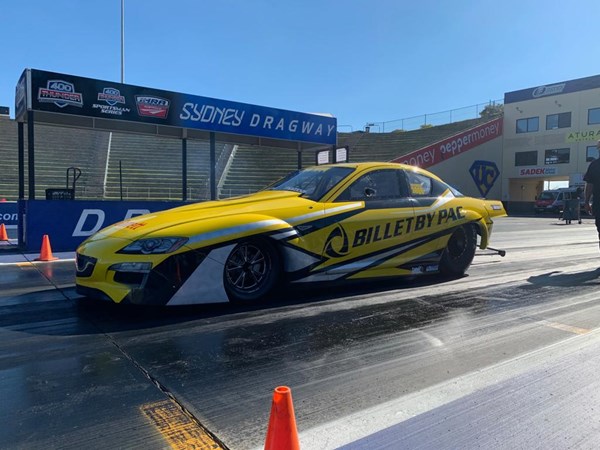 After the success of his ‘ROODGY'S BACK’ RX3, the team have decided to join the hunt for the 13B world title with Rodney stepping things up and transferring his running gear to a full chassis race car. Our good friend Puro from Yangelis Racing entrusted us with the purchase of the iconic ‘RG4L’ RX8 which previously ran a best of 6.55 @210mph, an impressive achievement using OEM plates over 18 months ago at Orlando Speedworld in the USA.

Since arriving at our workshop, the engine, turbo & gearbox setup were all removed and replaced with “Roodgy’s Back’s” #BilletbyPAC 13B engine, Garrett GTX55 Turbo and an air shifted Liberty 5 Speed gearbox. The car now runs a MicroTech Custom ecu, a MoTeC C187 Data logging dash and a MoTeC PDM looking after all of the electrical duties.

Rodney recently debuted his new ‘PACMAN’ RX8 at a private test & tune session at Sydney Dragway and after a few shake down passes, he has managed to run a best ET of 6.56 @204mph on his first full noise pass, to claim the title of Australia’s quickest 13B.  That time was further improved upon each time the car raced, with a current PB of 6.49@210 run at the 2019 Brisbane Jamboree event at Willowbank Raceway.

Moving into 2020 the car was sold as a rolling shell to our good customer Andrew Zada who will be back out again racing the car soon, this time with a big 20B doing the talking.

About: The team’s current lead car. Unveiled in July 2012 it straight away picked up where the previous car left off running straight into the sixes. Just under 12 months later the car, driven by George broke the world record for the fastest rotary-powered vehicle, running a blistering 6.47@222 down the quarter mile at the 2013 Fuchs Winternationals and since improved to a 6.263@223 at the 2015 Melbourne Jamboree.